Baby flamingos: information you do not know

Flamingos are a type of wading bird known for their bright pink plumage, long, thin legs, S-shaped neck, and thick, downward-pointing beak. They are part of the Phoenicopteridae family. 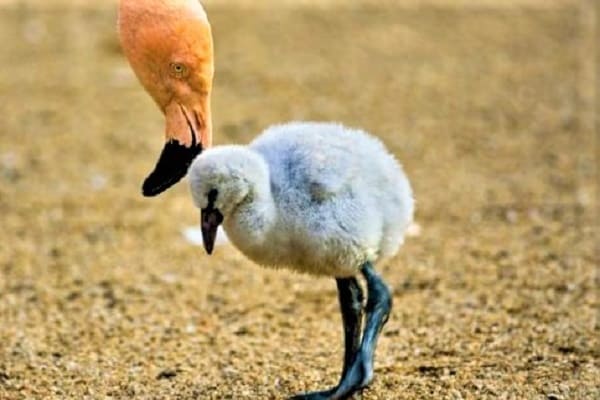 How big is a baby flamingo?

Newborn flamingo chicks are the size of a tennis ball (with legs).

Female flamingos usually lay one large egg and rarely lay two. The egg is white, oblong in shape and slightly larger than a large chicken egg.

How much does a baby flamingo weigh?

In this article, we have collected the most common questions about Baby flamingos.

The word "flamingo" comes from the Portuguese-Spanish word "Flamengo", which means "flame color" and best describes the amazing pink feathers of an adult flamingo. However, newly hatched flamingo chicks are not born with beautiful bright feathers, like their adult counterparts, but with soft, fluffy gray or white feathers.

A fluffy blanket provides enough insulation to keep the chick cozy and warm.

Newborn flamingos have short, straight red/pink bills. There are no distinct color spots on the beak, which are characteristic of the beaks of older individuals. Their legs are thick, swollen, and pink in color.

The swelling begins to subside 48 hours after hatching. Both beak and legs turn black seven to ten days after hatching. Around the age of 11 weeks, the beaks of young birds gradually begin to curve down.

Young flamingos are very different from their adults.

Instead of having bright reddish-pink structured feathers, pink legs, and a large, distinct bill like adults, young birds have downy gray feathers, black legs, and a greyish-white bill. The eye color of young birds is usually grey, which also differs from that of adults.

Young birds mature at three to five years of age and typically acquire pink feathers within the first two years of hatching. Depending on the flamingo species, primary and secondary feathers, wing coverts, legs, beak, and eye color also differ when the birds are fully mature.

What is the name of a baby flamingo?

The term for newborn flamingos is chick, chick, or baby. However, some people have suggested that "flaminglet" is a much better way to describe them! What do Baby flamingos eat?

At first, flamingo chicks are fed "goiter milk" exclusively by both parents. Both parents produce plant-based milk in the lining of the upper digestive tract.

"Milk" is rich in fats and proteins and has a bright red color. Unlike mammalian milk, it is a semi-solid, resembling pale yellow curd. Emperor penguins, wood pigeons, and pigeons are among other birds that produce plant-based milk.

How do flamingos feed their babies?

Chicks can feed on their own at four to six weeks of age, but may still be fed by their parents until they are 10 to 12 weeks old fledge. Both parents regurgitate a liquid called "cereal milk" into the child's mouth.

When can Baby flamingos fly?

They do this for four to six weeks, or until the chicks' beaks are developed enough to filter solid food. Young flamingos receive flight feathers about 11 weeks after hatching. They usually start flying at the age of two to three months.

How long do Baby flamingos stay in the nest?

Parents do not teach young flamingos to fly, but instead, make numerous attempts at flight until they are successful. Baby flamingos remain on the nesting mound for 5-12 days after hatching.

They will leave the nest when they are strong enough to walk, usually after four to seven days. The chick will explore the area under the close supervision of its parents and will return to the nest to feed.

A flamingo's nest resembles a mound of mud with a shallow hole at the top. It can be up to 30 cm tall and takes up to six weeks to make. Feathers, sticks, rocks, and dirt are some of the items adult birds use to build a nest.

After the female lays eggs, both parents take turns protecting and incubating for 27-31 days until hatching. After about five days, the chicks leave the nest, join small flocks of other young flamingos, and return to their parents to feed. The parent bird can identify the chick by its call due to the sounds the chick makes hours before hatching, which creates a bond between the parent and the chick.

About three weeks after hatching, the adults gather the chicks into large groups called nurseries. Young birds are cared for by several adult birds, and only their parents feed them. The chicks will begin to search for food on their own within the safety of the group.

When do Baby flamingos turn pink?

The pink or reddish color of adult flamingos' feathers, legs, and faces are due to their diet of foods rich in alpha pigments and beta carotenoids, including canthaxanthin. Algae and small invertebrates (insects, crustaceans, and mollusks) make up the bulk of their diet. Birds may lose some of their colorations and become paler if food sources are scarce.

Flamingos appear to be monogamous and begin mating at the age of six. Birds engage in large courtships in their colonies to attract a mate. Courtship rituals are initiated primarily by male birds and include marching, stepping, and head-turning.

What color are flamingo poop?

Flamingo feces are the same color as other bird feces - grayish white. However, the poop color of very young flamingos may appear orange due to their feeding on egg yolk before hatching.