Looking at a bird like this puffin, it's hard to reconcile its cute appearance with its place in the animal kingdom. The thing is, this cute puffin has something in common with a rattlesnake, as it's a reptile (Credit: Ray Hennessy, licensed from Unsplash, cropped). 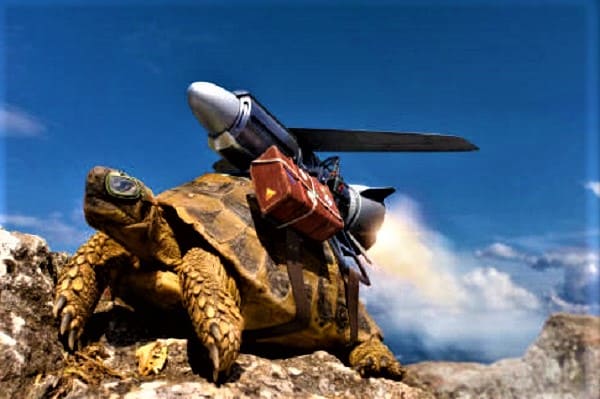 You read that right, birds are reptiles. Now I hear you say, “But did we know that they are a different group of organisms and that reptiles are just scaly, Although reptiles are not cold-blooded per se, some of them have feathers. In this post, I hope to convince you that the puffin pictured above and all of its avian relatives belong to snakes, lizards, crocodiles, and turtles in the reptile group.

One of my favorite webcomics is a Tyrannosaurus rex slowly turning into a chicken. In the first panel, he towers over a group of people, frightening them and basking in his monstrous scaly glory. But then everything starts to change, the huge predator begins to shrink in size and grow feathers, turning from a "terrible king lizard" (the real meaning of the word Tyrannosaurus rex, despite the fact that he is not a lizard) into too small and cute to be. a threat.

Molecular evidence tells us that during the Triassic period (251-199 million years ago) major groups of what are now thought to be reptiles evolved and are relatives of the group that was the ancestor of crocodiles and dinosaurs. About 65 million years ago, a mass extinction wiped out all but a group of small, feathered dinosaurs (we now know that most dinosaurs were probably feathered). These dinosaurs evolved over time into what we now call birds.

why are birds commonly overlooked when it comes to reptiles?

So, despite their shared evolutionary history and close relationship to other reptiles like crocodiles (I encourage you to find someone who says crocodiles are not reptiles), Part of the problem may be people's tendency to distinguish things by how similar they are. Of course, birds lay eggs, as do many other reptiles, but they are also covered in feathers and most of them fly.

How could these feathered flying animals belong to the same phylum as the scaly, legless snakes? Part of the problem may be that birds as a group are different from their closest relatives, crocodiles (alligators, crocodiles, caimans, etc.). Most birds are smaller than humans, have feathers covering most of their bodies, and many of them fly. Crocodiles, on the other hand, cannot fly, have no feathers, and many are much larger than humans.

To convey this message to me using another group of animals, I will use humans and their closest primate relatives. Most people (except religious fundamentalists) know that chimpanzees are the closest relatives of humans in the animal kingdom, but in general, they are almost completely different from us. They walk on hands and feet, most of their bodies are covered in rough fur, and move through trees as easily as they move on the ground. However, we humans tend to be relatively hairless (at least compared to chimpanzees), walk entirely on our feet, and dominate the world like other species before us.

In fact, many people don't name people when they talk about primates, even though WE ARE primates. It may be a cultural holdover from the days when humans saw themselves as "special" or "chosen" and therefore superior to "primitive" animals, but I think it has more to do with how different we look from both of them. behavior. Despite these differences, we are as many primates as our chimpanzee relatives, and birds are reptiles. This prejudice is not just for the general public, we scientists are also guilty of separating birds from their reptile relatives.

Why difference and separation?

While researching this topic, I searched for articles to get an idea of ​​how the scientific community discusses and relates to birds. I used the search terms "bird + reptile + phylogeny" to find records showing the evolutionary history of a group of reptiles, and almost all relevant records used terms such as "birds and reptiles" or "non-avian birds and reptiles".

Part of the problem may lie in the classical classification system, which Carol Linnaeus called the Linnaean system, in which animals are divided into groups based on their physical similarity to each other. In this system, reptiles are creatures that cannot regulate their own (exothermic) body temperature and have scales, so birds do not fall into this category. It wasn't until the 1940s that phylogenetic science, through the study of genetic conditions and grouping organisms according to their genetic similarity, was able to demonstrate that birds, lizards, turtles, snakes and crocodiles were descended from primitive reptile ancestors. The second possibility is that it is easier to distinguish birds from "non-avian reptiles".

In my experience with the literature, most research using birds is about some aspect of bird's unique traits (such as flight or roosting in large colonies), and those using other reptiles such as turtles are more interested in some aspects of their non-avian behavior. nature. biology, for example, how to overwinter as an ectothermic animal.

Where does he leave the birds?