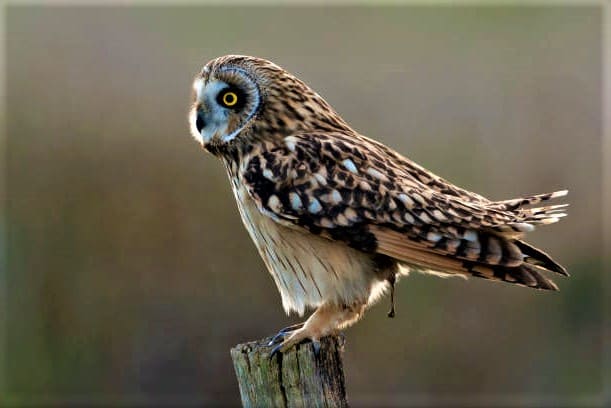 Soft substances are digested in the stomach of owls, but the fur and bones are regurgitated through the mouth in the form of a small bag, or pellet. The remaining parts, such as fur and bones, form into a ball that the owls burp or spit out. Much of what owls cannot digest comes back in the form of pellets, not poop. They pass through the digestive tract and are regurgitated as pellets after a few hours, often while the owl is sitting.

Like most predators, owls swallow their food whole or nearly whole, depending on the size of the prey. Like other birds, owls cannot chew food -- small prey are swallowed whole, while larger prey are chopped into pieces before swallowing. Owls swallow their prey whole or in chunks, but cannot digest fur, teeth, bones or feathers. Because owls often devour mice, voles, chicks, and other prey, their digestive systems have to contend with bones, fur, and feathers.

Things like bones, fur, teeth, and feathers cannot be digested by owls, and things like bones are compressed into pellets that are regurgitated before their next meal. Owl pellets are made from the indigestible parts of their prey: bones, fur, claws, and teeth. Owl pellets differ from other predators in that they contain a higher percentage of food debris.

The digestive acids of owls are not as strong, so owl pellets contain more intact bones and other animal remains. Remember, owl pellets are parts of animals that owls eat that they cannot digest, such as bones, teeth, and fur. Owl pellets are different in that they contain bones from their previous food, as well as fur, feathers, or insect parts, because the owl's stomach digestive juices are not acidic like those of other birds. Owl pellets contain bone and are usually rounded at both ends, while mammalian dung has no bone thickness and tapers at the ends.

For example, because eagles and hawks tend to tear their prey apart and have stronger digestive acids, their pellets look like fur balls. When you explore our forested areas where owls live, you may stumble upon these fluffy clumps of down on the forest floor - they are called owl pellets, and no, they do owls poop, but they can tell us a lot about what owls eat.

Because the pellets contain undigested parts of owl food, you can often tell what an owl has eaten if you pick it up and look inside. When children dissect owl pellets, they can see and identify the tiny bones of this owl food, they can learn about the owl's diet and place them in the food web. Although owls vary (from the small elf owl, which feeds on moths and crickets, to the large Eurasian eagle owl, which feeds on rodents, rabbits, and other birds), almost some of the pellets sold for autopsy are barn owls. Owl pellets tend to be larger than those thrown by hawks because owls tend to devour prey whole, while hawks tear off small pieces of meat.

That's it, owls produce balls to make room for another meal, and you also learned that while producing these balls, they make painful expressions. When an owl is about to release a pellet, it assumes a painful expression: the eyes close, the facial disc shrinks, and the bird does not want to fly.

One of these is the owl pellet, which owls (and many other birds) cough up about 6-10 hours after eating. Owls' stomachs pack certain parts, such as bones, into a ball called "granules" that they spit out or toss. Owls tend to swallow their prey whole, and if they grind up large prey to swallow, their digestive juices are not as strong and you can find a lot of information about their diet in their pellets.