What Do Flamingos Eat?

Flamingos are certainly one of the most bizarre birds known for their pink plumage, long legs, and unusual collective mating behavior. In fact, flamingos are the only surviving bird from the order Phoenicopteriformes - the rest have become extinct. These tall waders have an interesting diet to match their other bizarre characteristics, Flamingos are not born pink, they become pink throughout their lives due to a diet rich in algae. 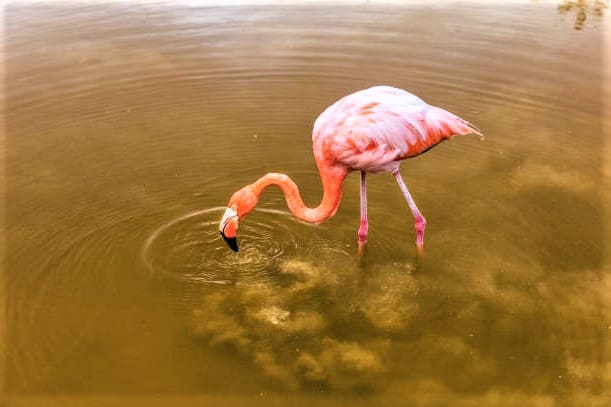 So what do flamingos eat?

Their diet consists mainly of seaweed, shrimp and other shellfish, which also consume seaweed. Seaweed is rich in natural carotenoids, nutrients and pigments, which are also found in colorful vegetables such as carrots, peppers and tomatoes. Once metabolized, these carotenoids turn flamingos pink.

While all flamingo species have the same diet, the amount and type of algae they consume affect their pink color. Interestingly, their pink hue ended up affecting them in other ways too, as healthy mates are often chosen based on how deep pink their plumage is, indicating that they have a particularly rich diet. Read on to learn more about the eating habits of this strange bird! All flamingo species feed on blue-green and red algae, as well as small crustaceans such as shrimp, prawns, crabs and shellfish, small fish, and some seeds and plant material.

What do flamingos eat in the wild?

Algae form the basis of the diet of some species of flamingos, including lesser flamingos, James flamingos, and Andean flamingos, while greater, Caribbean, and Chilean flamingos prefer fish, crustaceans, and larger organisms. It depends on what organisms are present in their habitats in lakes and lagoons, which also depends on the pH of the water. Very acidic or very alkaline waters are less likely to harbor complex marine organisms.

The carotenoids that make flamingos pink or red are not only metabolized by the algae themselves, but also by shrimp and other algae-eating foods. The pinkest flamingos still eat the most algae and the least meat. Before feeding, flamingos often stomp their feet on the bottom of a lake or lagoon to kick up dirt and sediment, releasing algae and other food in the process. Flamingos are known as filter feeders and feed with their heads turned upside down.

Their beak is also suitable for this and has a rather pronounced downward curve. Their lower bill is actually much stronger than their upper bill and can move independently, allowing flamingos to quickly pump water through their internal filter system. This inverted position allows flamingos to carefully collect water in their powerful upper beaks and pump water over hairy gills, which effectively filter even very small creatures such as algae and diatoms. This is a complex and highly adapted filtration system that can be seen in some waterfowl such as mallards. Smaller, James and Andean flamingos are more specialized in filtering algae, while larger Caribbean and Chilean flamingos are more adept at filtering out larger organisms such as crustaceans, larvae, mollusks and small fish. 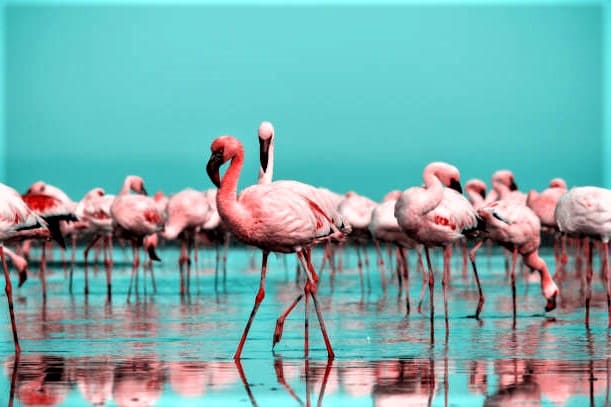 What do flamingos eat to turn pink?

Flamingos are known around the world for their pink or red plumage, but lesser flamingos are actually dull grey and not pink at all. The word "flamingo" itself comes from the Spanish word "Flamengo" - "color of flame".

The rather specialized diet of flamingos consists of large amounts of blue-green and red algae and other algae-eating creatures. This varies from species to species: some flamingos (for example, these algae contain high concentrations of natural nutrients and dyes called carotenoids, especially beta-carotene, which is found in carrots and sweet potatoes. Liver enzymes break down carotenoids and the pigments are reabsorbed and subsequently deposited in flamingo feathers and skin.

Why are some flamingos pinker than others?

Young flamingos gradually darken over the course of 2-5 years. Not all flamingos are the same color or shade of pink.

American flamingos are one of the brightest shades of pink or red because they are particularly high in algae, while smaller flamingos tend to have a lighter pink color, especially in areas with less algae. The color also depends on the proportions of the flamingo's diet, as those who ate almost exclusively seaweed for their primary carotene were darker than those who ate shrimp and shellfish for their secondary carotene.

Greater flamingos have also been observed to smooth their feathers directly with beta-carotene-rich secretions produced by a gland near the tail. This allows them to "recharge" their colorful plumage to attract a mate.

What do little flamingos eat?

Baby flamingos are fed exclusively with milk collected for about two months.

A goiter is an extension of the digestive tract that allows birds to store food and partially digest it before being swallowed or reflux fed. Adult birds partially digest food from the crop and regurgitate it into the mouths of chicks for feeding.

Flamingo milk is often bright red, which is why some compare it to blood. Other birds that feed their young with milk include pigeons, pigeons, and penguins. 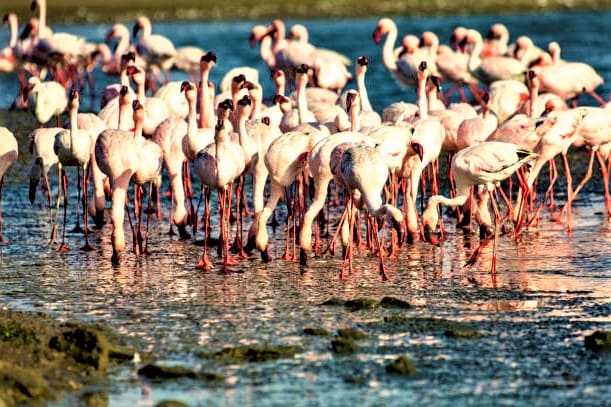 What do flamingos eat in winter?

After about two months, flamingos will begin ingesting food from the environment in the same way as adults, submerging their heads underwater and filtering out food such as algae and small crustaceans. Depending on where they live, some flamingo colonies actually migrate during the winter. For example, many large flamingos living in Central Asia migrated to India during the winter, and James' flamingos migrate to lower elevations when their feeding grounds freeze. Once flamingos find suitable foraging sites in winter, their diet will be the same as in summer, including abundant algae, small crustaceans and mollusks.

Flamingos are classified as omnivores and will filter and eat any food organisms they can find in their lake or lagoon habitat. This includes both seaweed and meat of various types, mainly shellfish, crustaceans and other mollusks, insects, larvae and small fish. While some species of flamingos are more adept at filtering out more important non-algae foods, all flamingos are omnivores. Flamingos eat shrimp, and even the shrimp they eat are probably pink in color for the same reason flamingos do: because they consume algae from the environment. All flamingos are omnivores, although some feed primarily on algae, while others are more meat-inclined.

Krill are shrimp-like crustaceans found in the oceans and seas, mostly in colder waters at depths of less than 50 m, although this may vary. Thus, flamingos do not eat krill as they are not seabirds and prefer to live in quiet lakes and lagoons. There may be some rare scenarios where krill find their way into coastal lakes and lagoons and possibly then into the diet of flamingos. Flamingos are omnivores and will eat plant foods if present in their environment.

Although they do not specialize in plucking and plucking plant debris from the bottom of a lake, they do consume any plant matter or filtered seeds. Large, Caribbean and Chilean flamingos consume crabs and other shellfish in larger quantities than other flamingo species. Their diet includes crabs, lobsters, shrimp, crayfish, crustaceans, and shrimp, although they most likely only consume smaller, harder-shelled crustaceans. If there are fish in their environment, flamingos will eat them as part of their standard diet. The great flamingo has perhaps the most extraordinary appetite for fish and does an excellent job of sifting through larger amounts of water to support its diet. 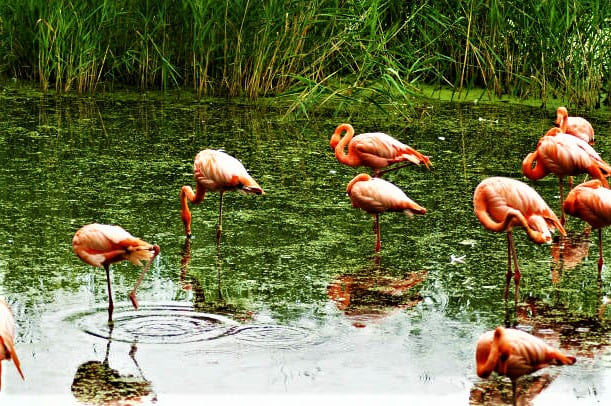 Do flamingos eat upside down?

Yes, the entire structure of the Flamingo's jaw has been adjusted for this.

When flamingos eat, they dip their head upside down in the water, pointing at their body. They then draw water through the comb structures, using their tongue to pump water through the filtration system at a rate of about four times per second. Flamingos are one of the few animals that can move their lower jaw independently of the upper one: the lower beak is also much stronger than the upper one.

You might think that somewhere at some point a frog made its way into a lake or lagoon only to be picked up by a flamingo. But this will be a very rare occurrence, and although flamingos are omnivores, they mostly only consume crustaceans and mollusks when it comes to meat.